The US Mission in Nigeria has commended the Economic and Financial Crimes Commission EFCC over the arrest of suspected fraudster, Osondu Victor Iwgilo, who has been on the wanted list of the Federal Bureau of Investigation FBI.

A statement released by Wilson Uwujaren, EFCC spokesperson today March 14, says Igwilo, a suspect wanted by the Federal Bureau of Investigation (FBI) since 2018, is the alleged leader of a criminal network of “catchers”. He was arrested alongside Okafor Nnamdi Chris, Nwodu Uchenna Emmanuel, and John Anazo Achukwu at a studio in the Sangotedo area of Lagos.

In a tweet posted this afternoon, The US mission congratulated the EFCC for partnering with the FBI to arrest Igwilo. 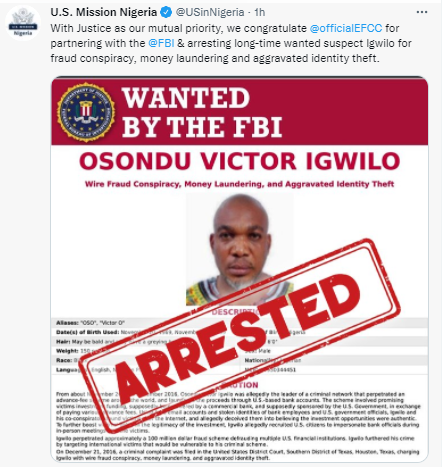 FG pardons former Governors Dariye and Nyame who were convicted for stealing N2.7bn