One of the personnels has been identified ad Flight Officer Clement Joseph Ashu of Operation Safe Haven Sector 7 Kafanchan.

According to one Stanley Asukwo Effiong, he and the deceased officer attended mass in Kafanchan hours before the attack.

“Pikin wey wash him hands well, na him go follow elders Chop” Those were your words to me the last time we sat with you and Ralph Chinedu Odike at Concord garden. You so much believed in me and encouraged me,” Maureen Ghandu wrote.

“I had a lot to do today but I couldn’t, I was never myself and was wondering what was wrong. Yes I woke up feeling sad after viewing those gory pictures on social media about last night attack I never knew you where one of them.

“Yesterday was Feast of St. Patrick’s celebration and you really wanted to attend but the situation in Southern Kaduna was not something to write home about. You wished us well in the celebrations and asked for pictures as well from us.

“One thing I kept asking myself. What if you left your duty post to attend the feast day celebration will you have died??? God knows the best. Your crime was serving your father land. My heart bleeds big brother Clement Joseph Ashu .

“May Angels receive your soul and present it to God the most high. Rest in peace good man. Your killers will never know peace”

In his tribute, Emmanuel Junior Zakka, described the decased as a lector, the Airforce officer, a friend and brother.

“Clement Joseph Ashu, thank you for your service to fatherland, to my land of Southern Kaduna, though you came from Calabar,” he wrote.

“Memories of our time together at St Patrick’s, Kawo, as Lectors. It was great knowing you. When we were planning a reunion of old Lectors from St Patrick’s sometime last year, you were passionate and wanted it by all means. But we did not give you the farewell you wanted. We did not know. Mauree Zabe Daniel Ghandu pushed for it, but we did not all agree. Josephine Mwuese Justin wanted it badly, but it was not to be.

“My Guy, why? I am in tears as I type this. It is just hard to believe. But you did not die a coward, you died defending my people. You gave your life up in defense of the defenseless. That ambush…God, please why do these things happen to good men?

“Normally you upload pictures and videos of such events whenever they happen in SK. I did not see any today and at about 3.00 pm I tried your always-on line but it was unusually switched off. I then made a post on the group we belonged to – Former Members of St Patrick’s Kawo and asked for prayers for you.

“And then Ralph Chinedu Odike called me and tactically gave me a hint. Then Emmanuel Abubakar Soje chatted me and said he was not sure but then I should prepare for the worst in case. It was a tough way of telling me what I feared. I was still in disbelief. He said you attended Mass together yesterday.

Remember your message two days ago, telling me you would not be attending the St Patrick’s day because of the attacks in the Gidan Waya axis that needed your attention and your boys. You said Ralph had booked your hotel room already but no way. Now your heavenly room is set. Tell me it is a joke, if you can read me.

When I was in Lagos last August with Fr Zakka, at the 68 Army Reference Hospital, Yaba, you called and when you heard Fr Zakka was on admission to asked for my account number and sent a token for fruits. You be my guy wella, Clem. Then why this?

God of mercy, God of compassion, you are not my mate or else I would ask WHY ALL THIS Now a young wife and a baby girl, I know God will be their defense. I also know you will be close to them even in death.

“May this be heaven’s gain. Receive his soul, angels of God and present him to God the most High.” 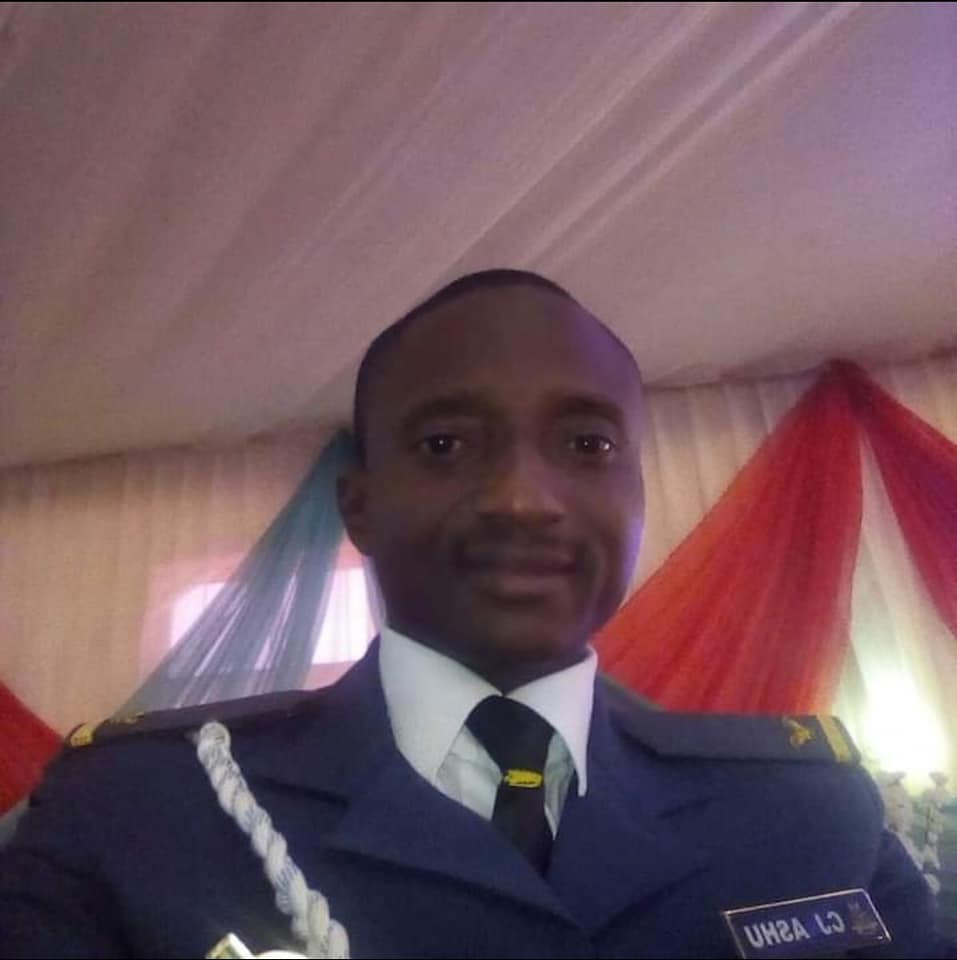 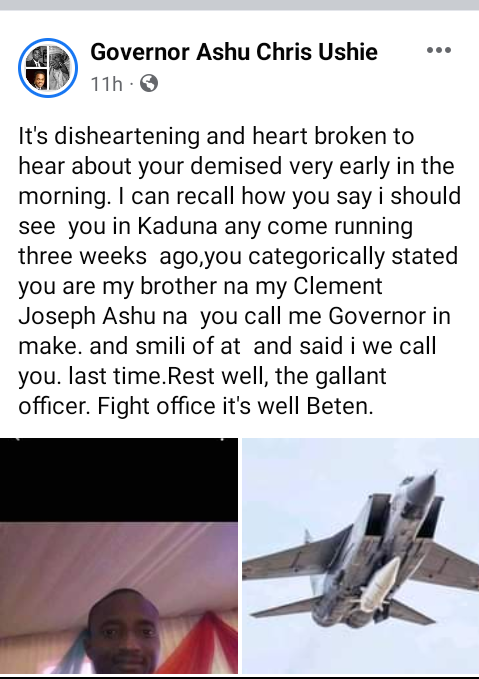 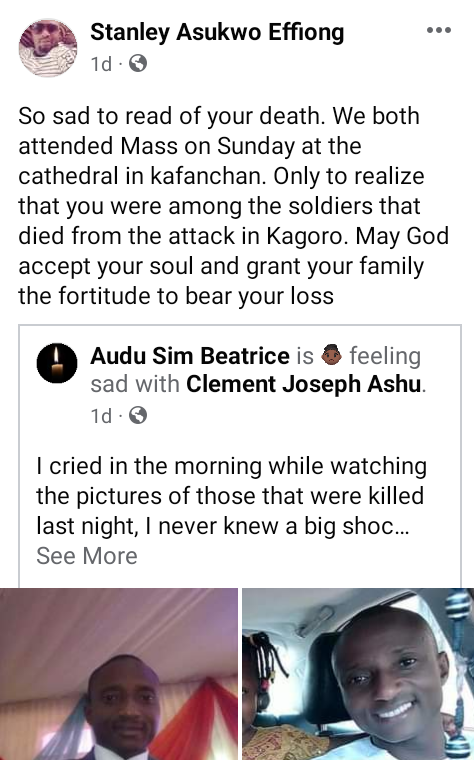 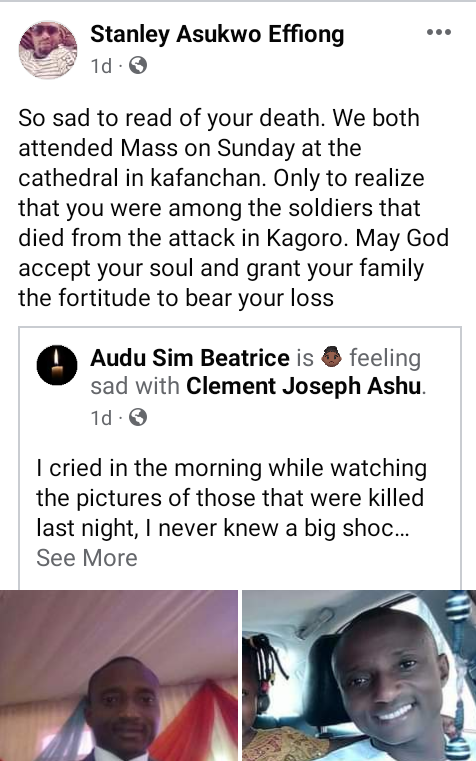 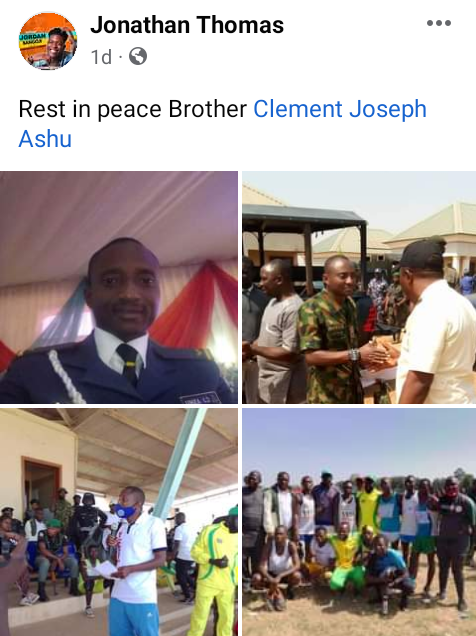 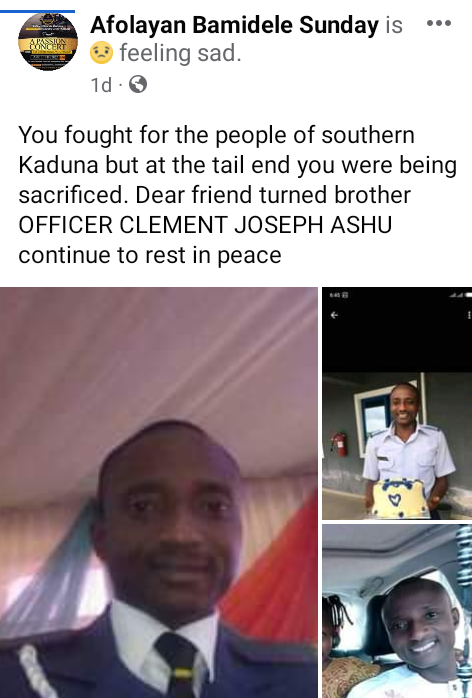 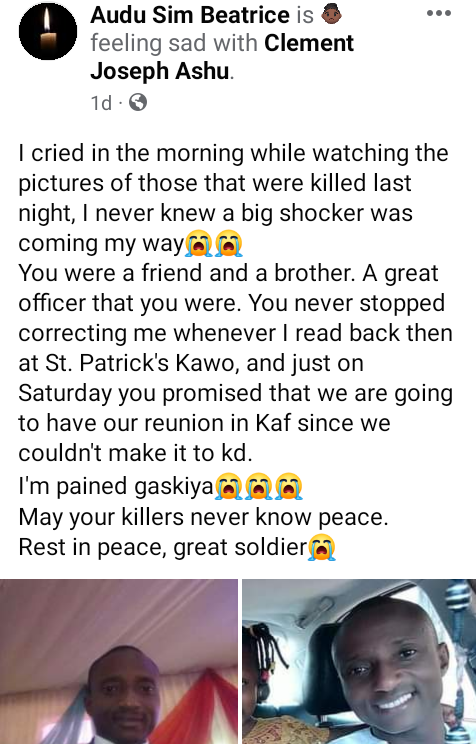