They all saluted the nonagenarian in different letters written to her on her 90th birthday obtained on Friday.

Buhari, in a congratulatory letter he personally signed, joined all Nigerians and the people of Lagos State in congratulating mama Otedola on her 90th birthday.

“I note your selfless service and charitable works to the people of Lagos State when you served as First Lady between 1992 and 1993 and years after this period.

“In celebrating this milestone, I also recognise the many contributions you have made to the people of Epe most recently the building and dedication of St. Peter’s Catholic Church.

“I wish you many more years in good health. Happy birthday,” Buhari added. 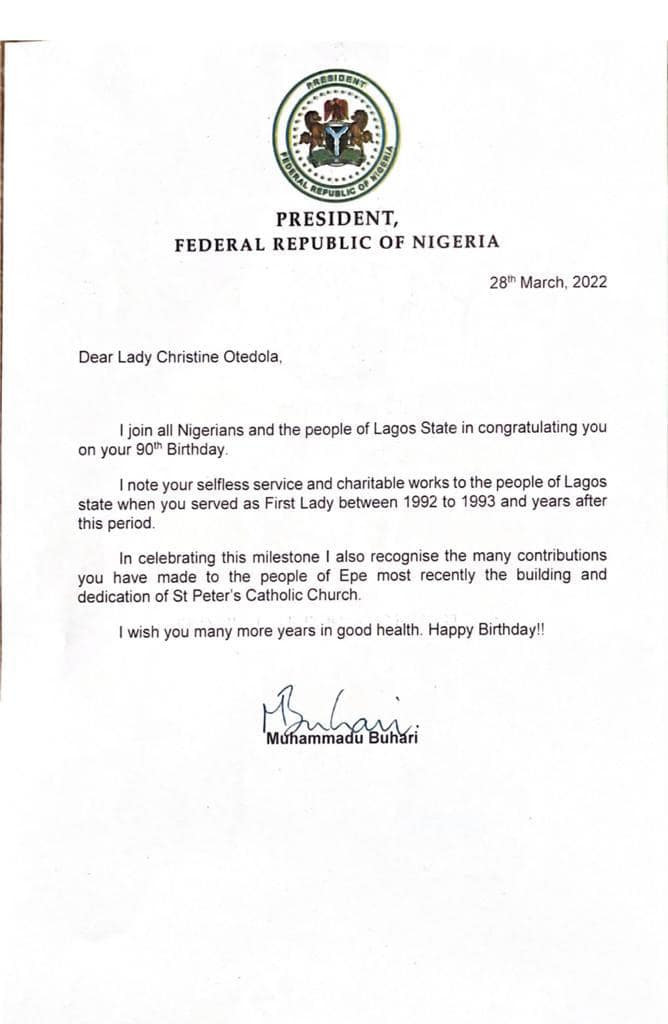 On his part, Osinbajo in a letter he also signed personally, wrote, ” Dolapo and I are honoured to wish our dear mother a happy 90th birthday. ”

The vice president praised the Lord God almighty for the privilege and His grace by which mama Otedola, ” now fulfill your long-expressed heart’s desire and vow to build a benefiting edifice, the St. Peter’s Catholic Church auditorium in Odoragunshin, Epe, for the worship of our Lord and continued propagation of the gospel.”

Osinbajo wrote further: ” God has been faithful indeed and we bless His holy name that you not only accomplished this, but are alive and well to witness its official dedication.

“Your remarkable life of service to others through philanthropy has most certainly been imbibed by your children and grandchildren whose reputation for promoting charitable causes is also well known.”

The vice president also prayed for strength and wisdom for her. 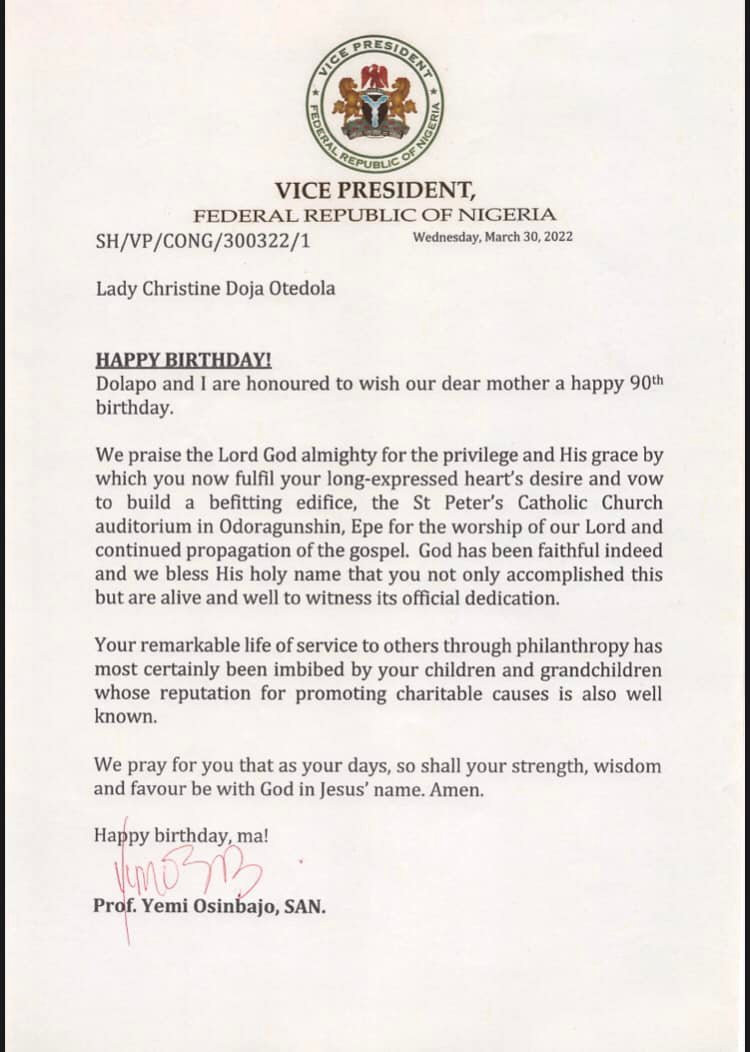 Similarly, Obasanjo conveyed the heartiest congratulations on behalf of his family as well as the people of Lagos State.

The former president pointed out that the life of the nonagenarian, “has been a source of blessing and tremendous inspiration to many generations of Nigerians who came in contact with you, especially the womenfolk.”

He added: “You are an exemplary patriot and the record of your steady, constant and beneficial influence as a dependable and worthy role model to the entire womenfolk and younger generations has been astonishingly remarkable.

“We therefore join you in thanking God for such a life spent in touching so many other lives positively.” 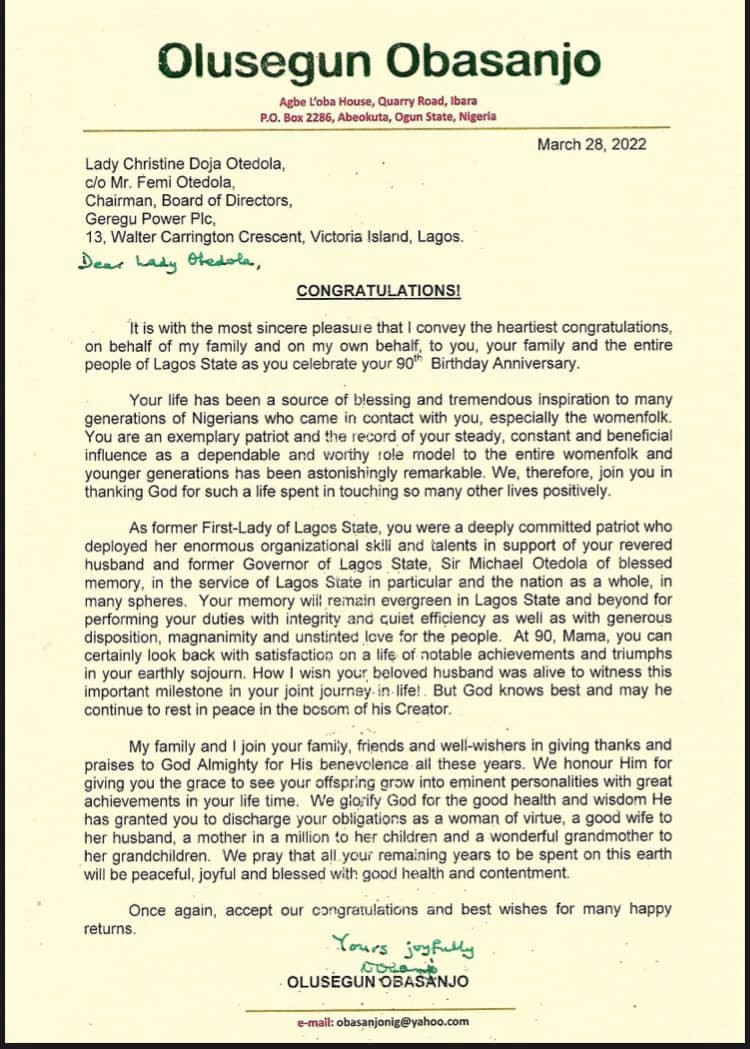 Gbajabiamila in a letter he personally signed, also wished Mama Otedola’s happy birthday and continued good health, joy and peace, just as he prayed that God’s grace upon her life would never wane. 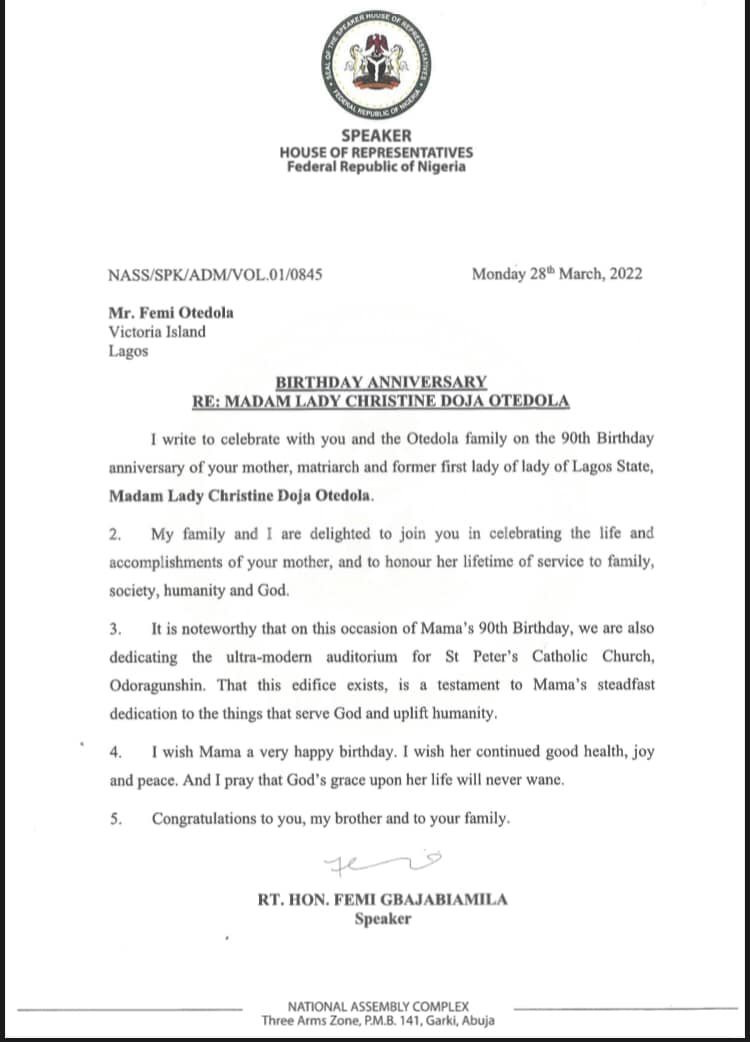 To Sanwo-Olu, the attainment of the milestone age by mama was a testament to the great grace of God upon her life, adding that it also provides an opportunity for the state government and good people of Lagos to restate how appreciative they are of her selfless service and contribution to the development of the state.

“The fruits of ageing and greying with grace are characteristics of your being and signpost to a fulfilled life. It is therefore a great honour for me to convey this sincere wish for continued good health and prosperity to a great matriarch whose successes as a wife and mother are evidenced in personal achievements of her illustrious children and grandchildren,” Sanwo-Olu added in a letter he signed personally.

Furthermore, the Lagos State governor noted that the dividends of the humanity of the former Lagos First Lady bore a perfect testimonial in her children’s lives, “more especially Femi Otedola, one of the most successful entrepreneurs of his generation.” 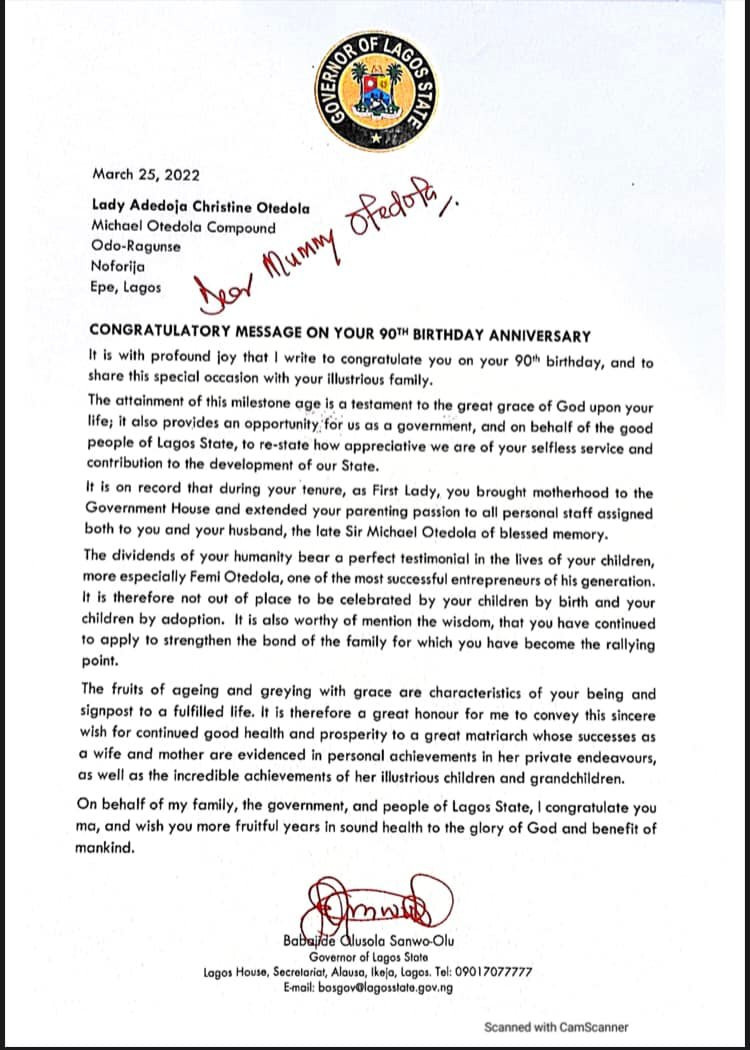 In the same vein, Abiodun stated that Mama Otedola’s life remains an uncommon bouquet of divine benevolence and grace as well as a testimony to thr awesomeness of the Almighty God.

“Your graceful attainment of an advanced age of 90, in good health and sound mind, is a rare favour that is desired by many.

“But the significance of this occasion is beyond the number, the landscape is dotted with many impacts you have brought to bear on the society,” Ogun State governor added. 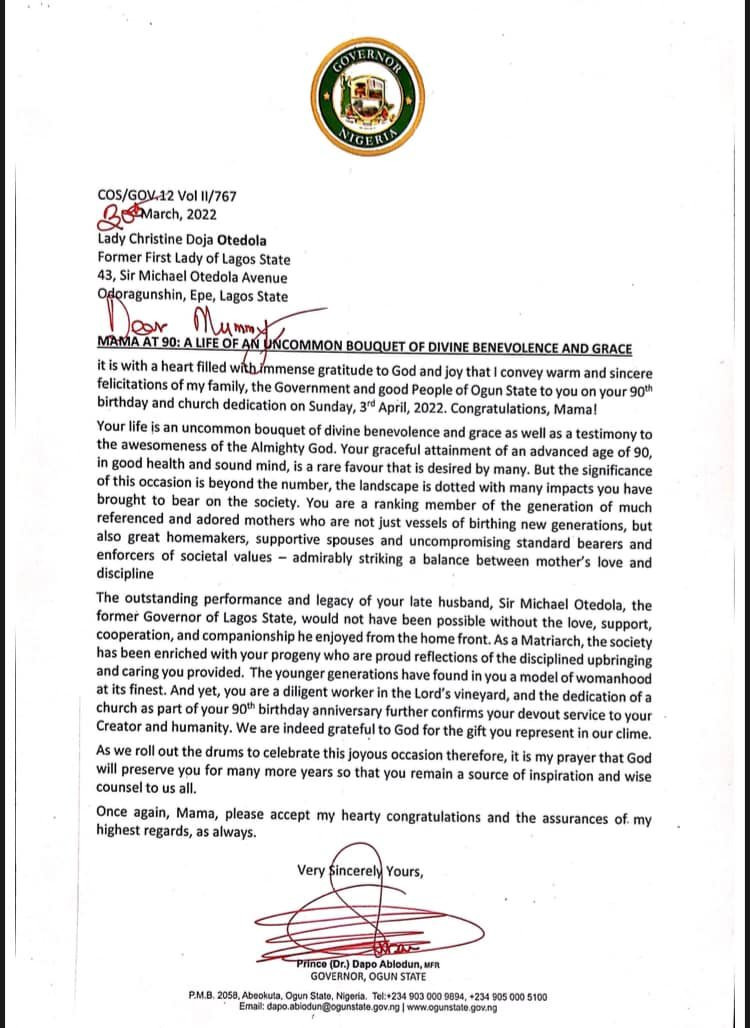 Gambari also congratulated the former First Lady of Lagos on her attainment of the blessed age of four scores and ten.

“I join your friends, family and many admirers all across the length and breadth of our dear country and around the world in celebrating this auspicious moment. Yours has truly been a life steeped in strong faith, a strong devotion to humanity and service to your community.

“It is my prayer that the Almighty keeps you in good health so our society continues to benefit from your vast experience and deep compassion, especially in these trying times when voices like yours are needed to serve as a soothing and calming influence,” Gambari wrote in a letter.

Dangote, in a congratulatory letter he also signed, quoted Mark Twain, a renowned American writer and publisher to have stated that, “Kindness is a language which the deaf can hear and the blind can see.”

According to the Africa’s richest man, ” For those of us who have been privileged to ever have contact with Lady Christine Doja Otedola, these words are in sinking tandem with her uncommon empathy and unique care for others.”

Dangote added: “For Lady Doja who is celebrating the grand landmark age of 90, her remarkable qualities stood her in good stead during her years as First Lady of Lagos State, where she held court with refined assurance principled dignity in service to the admiration of all.

“As she attains the age of 90, I will like to join other well-wishers to congratulate Lady Doja Otedola and wish her a happy landmark birthday, greater wisdom, immeasurable peace, abundant health and many more years of fulfilment in her dedication to God.”