A Magistrates’ Court sitting in Port Harcourt, Rivers State has remanded a pastor and human rights activist, Jude Ohanenye, in a correctional centre for alleged defilement of an 8-year-old girl.

Ohanenye, who is a member of Behind Bars, a human rights group, was arraigned on Wednesday on two counts bordering on sexual abuse and defilement to which she pleaded not guilty.

It was gathered that the incident occurred on March 16, 2022 in the Eliozu area of the Port Harcourt.

The charge read, “That you, Jude Ohanenye, on the 16th day of March 2022, at Eliozu, Port Harcourt, in the Port Harcourt Magisterial District, did unlawfully and sexually abused a girl of 8 years old by touching her vagina, thereby committing an offence punishable under Section 32 (1) (2) of the Child Right Act, Cap. 50 Laws of the Federation of Nigeria, 2003.

“That you Jude Ohanenye on the same date and place in the aforesaid magisterial district, did defile a girl of 8 years old by inserting your finger into her vagina, thereby committing an offence punishable under Section 32 (1) (2) of the Child Right Act, Cap. 50 Laws of the Federation of Nigeria, 2003.”

Behind Bars Director General, Harrison Gwamnishu, who had earlier confirmed the incident in a statement on Facebook, said the group acted promptly after receiving a complaint against the pastor and member.

“A member of our team Pastor Jude was charged to court for child sexual assault on a 8 year old minor in Portharcourt, Rivers State,” Gwamnishu stated.

“The victim narrated how Pastor Jude carried her on his lap and fingered her. We received the complaint and quickly ordered his arrest. He was arrested and handed over to the Police for a thorough and unbiased investigation.

“Medical report proved the child vagina was ruptured but hymen still intact. The police concluded their investigation and he has been charged to a competent court of jurisdiction.

“As organization in forefront of Advocacy to end all form of social vices, we will never hide our own no matter the pressure.

“Pastor Jude has been remanded in prison custody and case adjourned till 21st April, 2022 for a hearing.

“We wish to appreciate the Nigeria Police for refusing to grant bail despite the pressure from some highly placed individuals. We appeal to parents to be watchful as anyone paedophile is nearby. 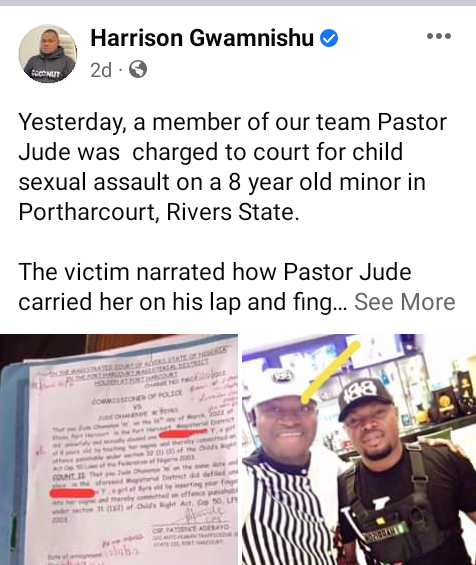 Nigeria needs men of integrity at this moment – Obasanjo

The charges of Criminal Conspiracy and Inciting Public Disturbance filed against Deborah Samuel’s murderers is an insult to the sensibilities of the parents of the deceased and God who created Deborah – Lawyer, Ebun Adegboruwa