Popular Abuja-based Prophetess, Rose Kelvin has asked men to go ahead and have sex with their wives when they are on their periods if they are that “pressed”.

Prophetess Rose said this while sharing her encounter with a man who is HIV positive. She said the man had an affair with another woman without a condom because he felt his wife was “unclean” while on her period.

The cleric further told men not to use “period” as an excuse to cheat on their wives as they can always make love to them with or without a condom.

A MAN GOT INFECTED WITH HIV WHILE HE ABSCONDED FROM MAKING LOVE TO HIS WIFE,DUE TO HIS CLAIMS OF HER BEING UNCLEAN AS A RESULT OF THE BLOOD.SURPRISINGLY,WHILE HE NARRATED HIS ORDEAL OF HOW HE CONTRACTED HIV,HE EVEN MENTIONED HE HAD NEVER HAD AN AFFAIR OUTSIDE HIS WIFE WITHOUT A CONDOM.. Whereas his wife is hiv – while he’s hiv+

If your wife is on period and you re pressed,go ahead and make love to her if you re too pressed,or use condom,never use her period as an excuse to cheat on her,if you truly love her,you can enjoy the process even in the pool..And you calling her unclean,how clean are you before God? 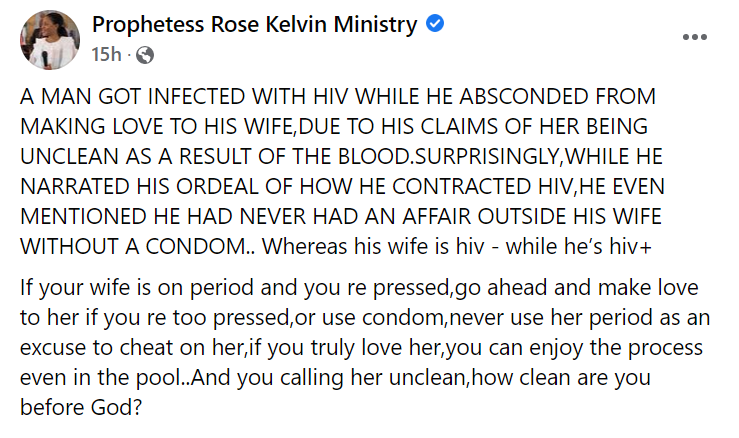 Man who was promised N200,000 if he stole a child apprehended in Delta state (video)