US-based Nigerian businessman, Francis Van-Lare, has said that Jesus “did not speak” against premarital sex.

According to Van-Lare, who was married to relationship expert, Amara Nwosu and divorced five times, no sex before marriage is not in the 10 commandments hence he didn’t listen to the ‘nonsense’.

“I have noticed that a lot of men who grew up being told that poi without getting married or fornication is hellfire are now against the teachings of Christianity for delaying the use of their gbola when they were younger,” he said.

“As for me I did not listen to that nonsense as poi Without being in marriage is not in the 10 commandments . Even Jesus did not say no poi until you marry.

“Na apostle Paul wey don poi wella when him name na Saul before he became an apostle introduce that one . Why him no talk say no poi until you marry in his youth.” 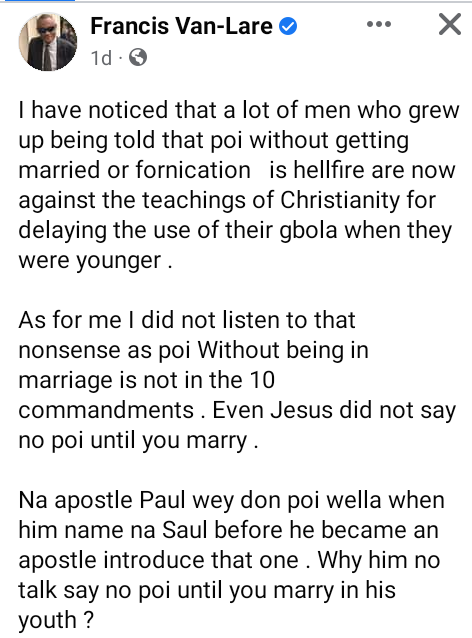 Actress Nkechi Blessing shares her chat with Opeyemi Falegan and videos from his friends in London saying he is fake, to dispute his claims that she came for his money

“Should I tell my story?” Yul Edochie’s second wife Judy asks as she tells her followers that “life is deep”