A Lagos-bound passenger died at the domestic wing of the Nnamdi Azikwe International Airport (NAIA), Abuja, on Tuesday, April 19.

The female passenger simply identified as Mama Tobi was at the boarding area for her flight to Lagos when she reportedly slumped as a result of high blood pressure.

A lawyer, Felix Ashimole, who witnessed the incident, said that the woman died in his hands as medical personnel from the Federal Airports Authority of Nigeria (FAAN) failed to show up on time.

“Where is the money they claim was sunk into renovating the airport into world standard? For 13 minutes, no FAAN medical personnel. She died in my hands and few others. A medical doctor on his way to Kano tried but as he finally said, “we lost her.

But she would’ve been saved, had FAAN provided basic insulin. She was diabetic. Her sugar went high; She entered coma; No medical attention; She saw the light and moved towards it. We kept calling her, Mama Tobi, Mama Tobi, don’t leave us, wake up, Good morning but saliva trickled down, foams bubbled and I knew she had seen a better place and wouldn’t be coming back!

“FAAN and the entire airline staff on ground were stupidly acting as if è no concern them. They kept announcing boarding and NEVER USED their speaker to ask if there is any medical personnel on ground. Finally they brought an ambulance from their fire fighting department, to take her corpse away! Good night Mummy Tobi. Your country and countrymen, failed you,” the lawyer wrote in a social media post. 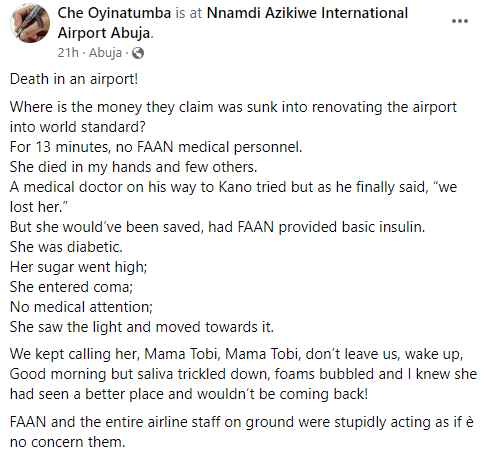 It was learned that the corpse of the deceased was taken to the NAF Medical Centre at the airport.

The spokesperson of FAAN, Faithful Hope-Ivbaze, who confirmed the incident said it was not true that FAAN did not respond on time.

“Our doctors were there. We are not happy it happened. We regret it happened but God knows the best in every situation.”she said

She, however, expressed the condolence of FAAN to the family of the deceased and prayed that God grants them the fortitude to bear the loss.