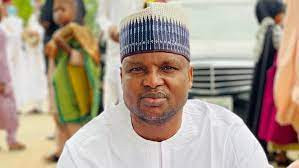 The two-storey shopping plaza, Assurance Plaza, located along the Giwa Barracks Road in Maiduguri, has about 100 stores while six other residential houses within the Maiduguri New Government Residential Area allegedly belonging to the suspended Deputy Commissioner of Police had also been marked by the NDLEA.

This is coming barely 48 hours after a suspected drug dealer allegedly linked to the N3 billion worth of tramadol intercepted by the then Kyari-led IRT team was arrested by operatives of the NDLEA in Lagos.

Recall that on February 14, 2022, Kyari was arrested for his alleged involvement in drug trafficking. He has since been in custody at the Kuje correctional center after his bail application was denied by an Abuja high court.

Father and son die in motor accident in Nasarawa

“Are you a hired assassin?- Clergyman Mike Bamiloye asks ladies who dress seductively and dance sensually in church

“When shall I see my class?” University of Benin students protest ASUU strike which has lasted for almost 3 months