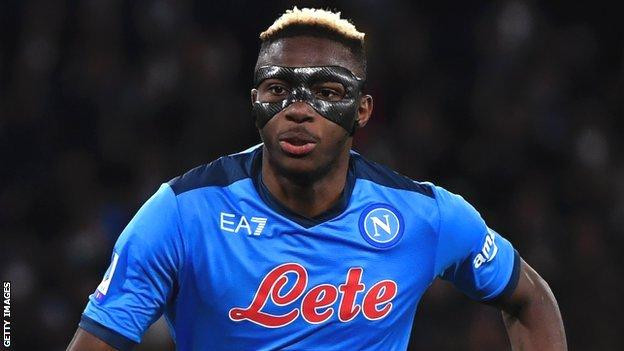 Arsenal have emerged as the number one contenders to sign Super Eagles striker Victor Osimhen from Napoli this summer, according to reports in Italy.

Osimhen has netted 17 goals for the Naples outfit this season and has been attracting several Premier League after his fine displays in the Serie A.

Arsenal will be in need of a new striker next season as they aim to secure Champions League football next season, with both Alexandre Lacazette and Eddie Nketiah, the club’s only recognized strikers at the moment.

According to Gazetta dello Sport., the Gunners are already making moves to revamp their frontline ahead of next season – now ahead of the pack in the race to sign Osimhen.

Arsenal will have to meet Napoli’s price tag for Osimhen, with the club reportedly set to hold out for a huge 100million euros (£84m).

Their move for Osimhen will depend on whether they make the Champions League, it adds, with Arsenal battling Tottenham for a top-four spot. They are currently two points ahead of their rivals with four games left.

Manchester United are also ‘linked with a move for the player, the report claims, while Newcastle are also monitoring the situation and would be able to meet Napoli’s huge demands.

Man arrested for poisoning his wife and her friend

Nigeria to face France, Canada and South Korea at 2022 U-20 Women’s World Cup in Costa Rica