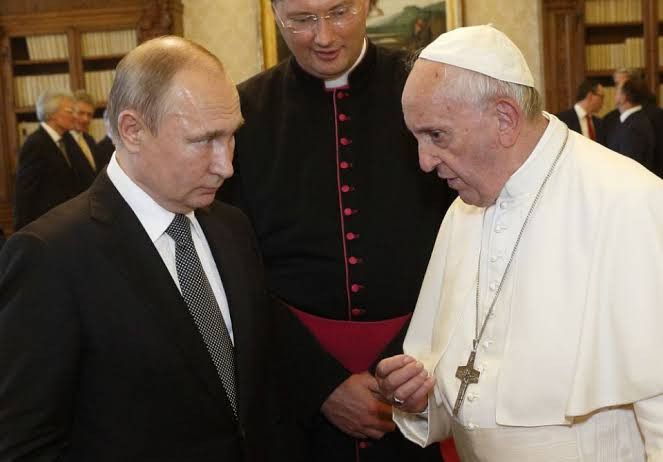 Catholic church leader, Pope Francis has announced that he will be visiting Russia to discuss the Ukraine war with President Vladimir Putin.

Speaking in an interview published on Tuesday, May 3, Pope Francis said that he asked for a meeting in Moscow with Russian President Vladimir Putin to try to stop the war in Ukraine but had not received a reply.

The pope speaking to Italy’s Corriere Della Sera newspaper that Patriarch Kirill of the Russian Orthodox Church, who has given the war his full-throated backing, “cannot become Putin’s altar boy”.

Francis, who made a visit to the Russian embassy when the war against Ukraine started, told the newspaper that about three weeks into the conflict, he asked the Vatican’s top diplomat to send a message to Putin.

The message was “that I was willing to go to Moscow. Certainly, it was necessary for the Kremlin leader to allow an opening. We have not yet received a response and we are still insisting”.

He added: “I fear that Putin cannot, and does not, want to have this meeting at this time. But how can you not stop so much brutality?”

Asked about a trip to the Ukrainian capital Kyiv, which Francis aged 85, last month said was a possibility, the pope said he would not go for now.

Politician, Adamu Garba, yanks off APC flag from his office days after failing to secure his presidential nomination form (video)

The way some married women cheat on their husbands especially in Lekki is alarming – Businesswoman, Sandra Iheuwa says