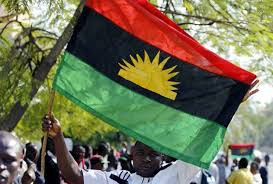 The Indigenous People of Biafra (IPOB) has stated that those enforcing sit-at-home in South East are criminals and not working towards the Biafra agenda.

The statement by IPOB comes after 6 suspects were killed by the Joint Task Force on Monday May 16, while attempting to attack the palace of the Imo State chairman Council of Traditional Rulers, Eze Emmanuel Okeke.

IPOB in a statement by its spokesperson, Emma Powerful on Wednesday, May 18, denied the suspects saying they weren’t IPOB or Eastern Security Network (ESN) members because ”the aim of the criminals and their sponsors was to kill the youths and depopulate Igbo land.”

Read the statement below…

“We wish to remind them that those they killed in iheoma and Amaifeke in Orlu were not IPOB members or ESN operatives because IPOB volunteers don’t enforce non-existent Monday sit-at-home.

“It’s not in doubt that IPOB issued Monday sit-at-home order to solidarise with our Leader but upon pleas by our mothers and elders based on its adverse effects on the economy of our people, we quickly rescinded it. Anyone still enforcing Monday sit-at-home is not a genuine IPOB member but a dissident , and doesn’t deserve any mercy.

“We have severally threatened to deal with these dissidents giving us bad name. So, we even commend security agencies for dealing with such hoodlums in the manner they deserve because of their stubbornness. IPOB is a disciplined and responsible movement. We don’t know where such hoodlums are coming from and what agenda they are pursuing but certainly not Biafra agenda.

“We, therefore, ask the security agencies to stop referring to such dissidents as IPOB members because they don’t belong to us. The security agencies should stop associating us with criminals that have no connections whatsoever with IPOB. We equally advise them to be professional in dealing with such characters so that innocent citizens are not caught in the crossfire.

“It should be noted that IPOB volunteers are not in the market or streets; they know their duty posts – in the bushes and forests of Biafraland protecting our farmlands from the Fulani terrorists masquerading as herdsmen in our territory.

“It’s unfortunate that the Nigeria security agencies are turning the truth upside down because they want the public to believe they are working hard while in reality they are pursuing an Islamist agenda. They kill innocent citizens on the streets and tag them IPOB members and ESN operatives.

“Nigeria army should leave the people of Orlu in peace and allow them go about their daily business and focus on the terrorists and bandits in the North where killings are the order of the day.” Powerful stated.

He urged stakeholders in the South East Region to come together and fight “this criminals trying to blackmail and demonise IPOB. We don’t know them and have absolutely nothing to do with them.

“These criminals are kidnapping, snatching cars and killing innocent citizens claiming they are IPOB and ESN members while they are not. They deserve no mercy. They are not worthy to live. Whoever is sponsoring them should be brought to book.” He said.