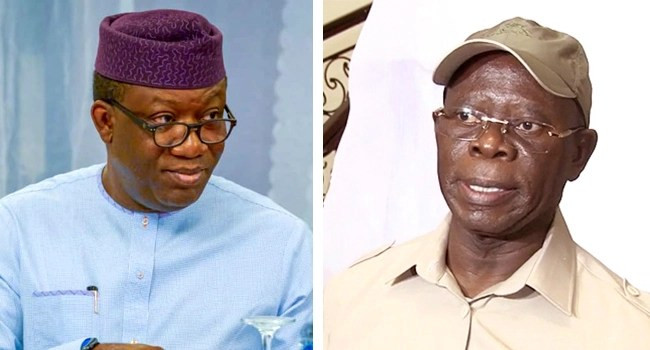 Former Chairman of the All Progressives Congress, Adams Oshiomhole has alleged that Governor Kayode Fayemi of Ekiti state asked him to rig the 2018 APC primaries.

Oshiomhole made the claim in an interview on Channels Television and further claimed that Fayemi asked him to rig the party’s primary election in 2018 in favour of some unnamed people.

“I told Governor Fayemi that it would be his portion, not me.

“I can’t be used as an instrument of fraud to invite people to buy forms and convince them that they are going for the primary, regardless of how the people will vote and this is the man that will prevail? You want to use me for such a purpose?”

Reacting to the claim, Fayemi’s media aide Olayinka Oyebode said the allegation is laughable as his principal has been a consummate democrat even in difficult times.

He claimed that Oshiomhole is still suffering post-traumatic stress disorder because of his removal as chairman of APC.

“For the avoidance of doubt, Governor Fayemi has no reason to approach Comrade Oshiomhole for favours for any election. Fayemi has a stellar track record of being a consummate democrat even in difficult times.

“The allegation, which was made on national television, is not only false, puerile, and laughable, it is a figment of the imagination of the former APC chairman as Fayemi has never asked Oshiomhole to rig the election for him or any other person and never had any reason to ask for such.

“Members of the public are therefore urged to disregard the allegations by Oshiomhole, who apparently is still experiencing a post-traumatic stress disorder because of his removal as chairman of APC.

“If true, we challenge Oshiomhole to provide the public with independently verifiable evidence of his unsubstantiated claims.”