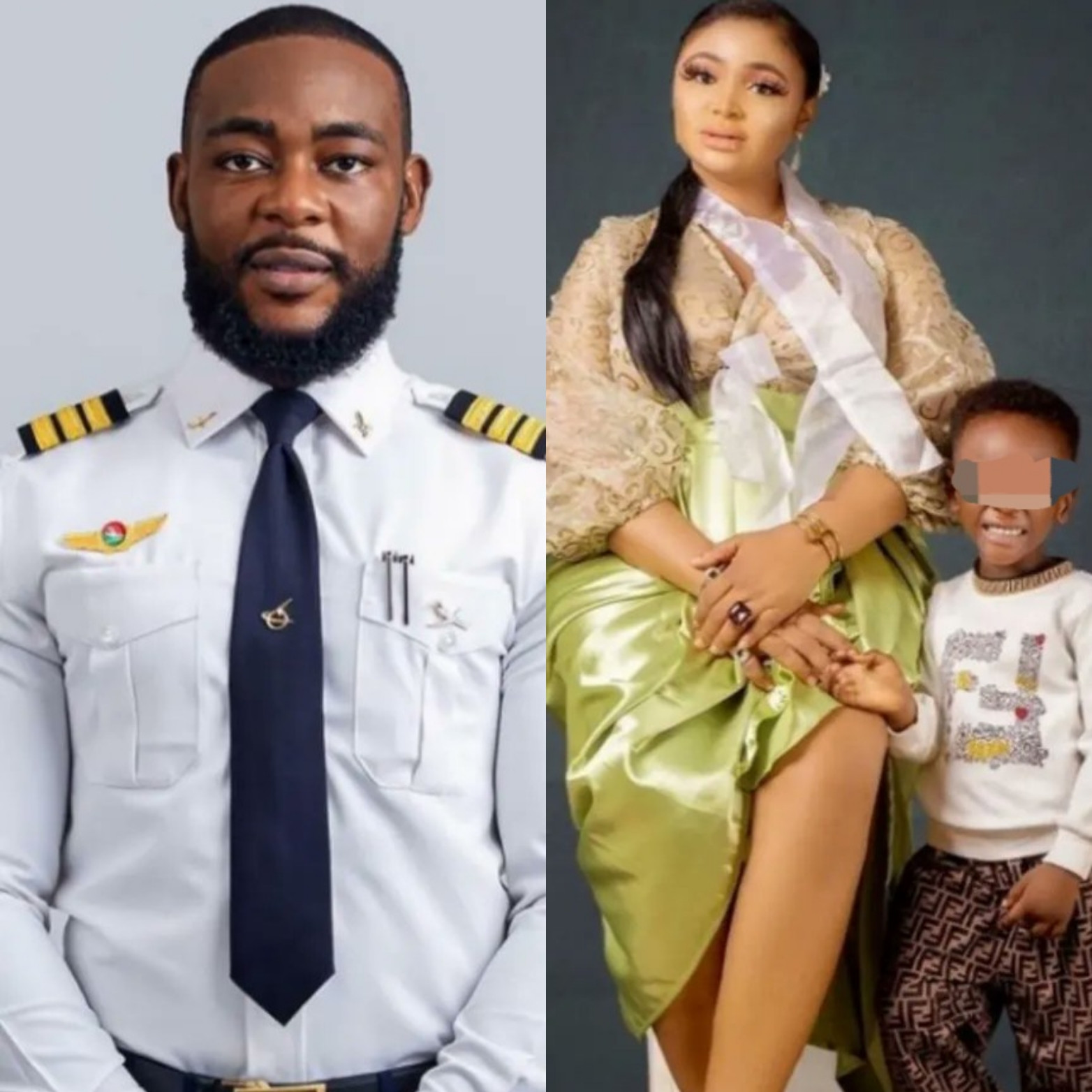 Irene Chiamaka Nwachukwu, who shares a son with Jamil Abubakar, the son of a former Inspector-General of Police Mohammed Abubakar and the son-in-law to Aliko Dangote, has filed for sole legal custody of their son.

Irene took this action because of the tweet Jamil Abubakar made following the lynching and burning of Deborah Samuel, a student of Shehu Shagari College of Education, Sokoto, for allegedly blaspheming Prophet Mohammed in their school’s group chat.

Jamil had tweeted: “In Islam, we respect the Injil, Taura, Zabur, we were never taught to disrespect any of the book, or any of the prophets from Adam to Muhammad SAW and the Quran.

“The punishment for blasphemy is death In most religions including Christianity. Respect people’s religion, it’s simple.” 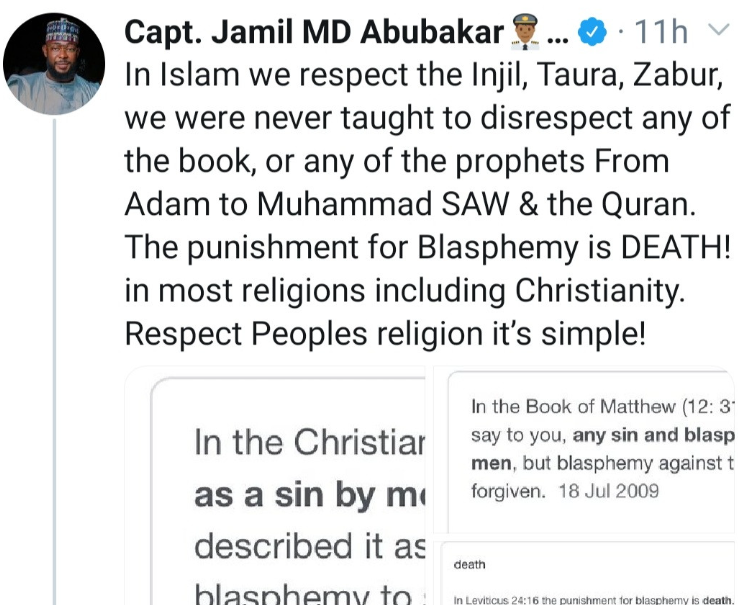 Irene took to Instagram to share screenshots of the court papers she filed to ask for full custody of their son.

She said she is disturbed and seriously concerned about leaving her son in the care of someone with such extreme mindset.

Irene stated that she wouldn’t be seeking child support or needing his assistance with parenting.

Irene pointed out that her son is from a Christian home and she is concerned about leaving him with someone with such ideology.

Court documents filed by Irene reads: “With your client Mr Jamil MD Abubakar’s recent tweeting on social media dated 12th May 2022, I have come to the decision that my child will not be going anywhere near him, now or in the future, as I do not want my child to be raised by or be in the custody of someone with such extreme religious views, in order not to confuse the poor boy’s thoughts or cloud his sense of reasoning.

“My child attends a school with pupils, from various backgrounds and beliefs, it will therefore be dangerous to expose him to such teachings. I’ve been the only responsible parent and my child has been in my custody since birth, so it’ll be best he stops contending custody with me in court at this time.

“This is also to note that I will not be asking for or accepting any child support, or needing his assistance with parenting such as attending Parents Teachers Association meetings, picking a school or having a say on what school he attends, or the house the child lives in as was stated in the countersuits filed against me where he claimed paternity to the child who I’ve been solely responsible for in the last five years.

“I hereby withdraw any motion that has been filed by my previous lawyer (who I disengaged in March 2022) in the past to that effect, as this might be your client’s reason for being entitled to my son’s custody.

“Forgive me if I expressed the desire to co-parent with him, where he asked to play the fatherly role, I am now realising that this will never happen as the child’s custody he’s asking for shares Christian blood, and I’m very disturbed and seriously concerned about leaving my child in the care of someone with such mindset and ideology about religion.

“I had thought that the man I met in my teenage years was liberal in his thoughts and views, but obviously I was too naive to see beyond that and as a mother, it is my duty to ensure the mental and psychological safety of my child.

“Your client Mr MD Abubakar will do well to drop the lawsuit he filed on 25th January, 2022, against me in the court of appeal and let the high court (who dismissed his case against me) grant my request for sole custody, as I do not need a dime from him to cater for my child now or in the future.

“He hasn’t been in my son’s life and I wish this continues to be so. As soon as I am done with my professional exams, I will be able to engage a new lawyer, and a fresh motion for sole custody will be filled and served before the next court date.

“In the meantime address any information or process directly to me.” 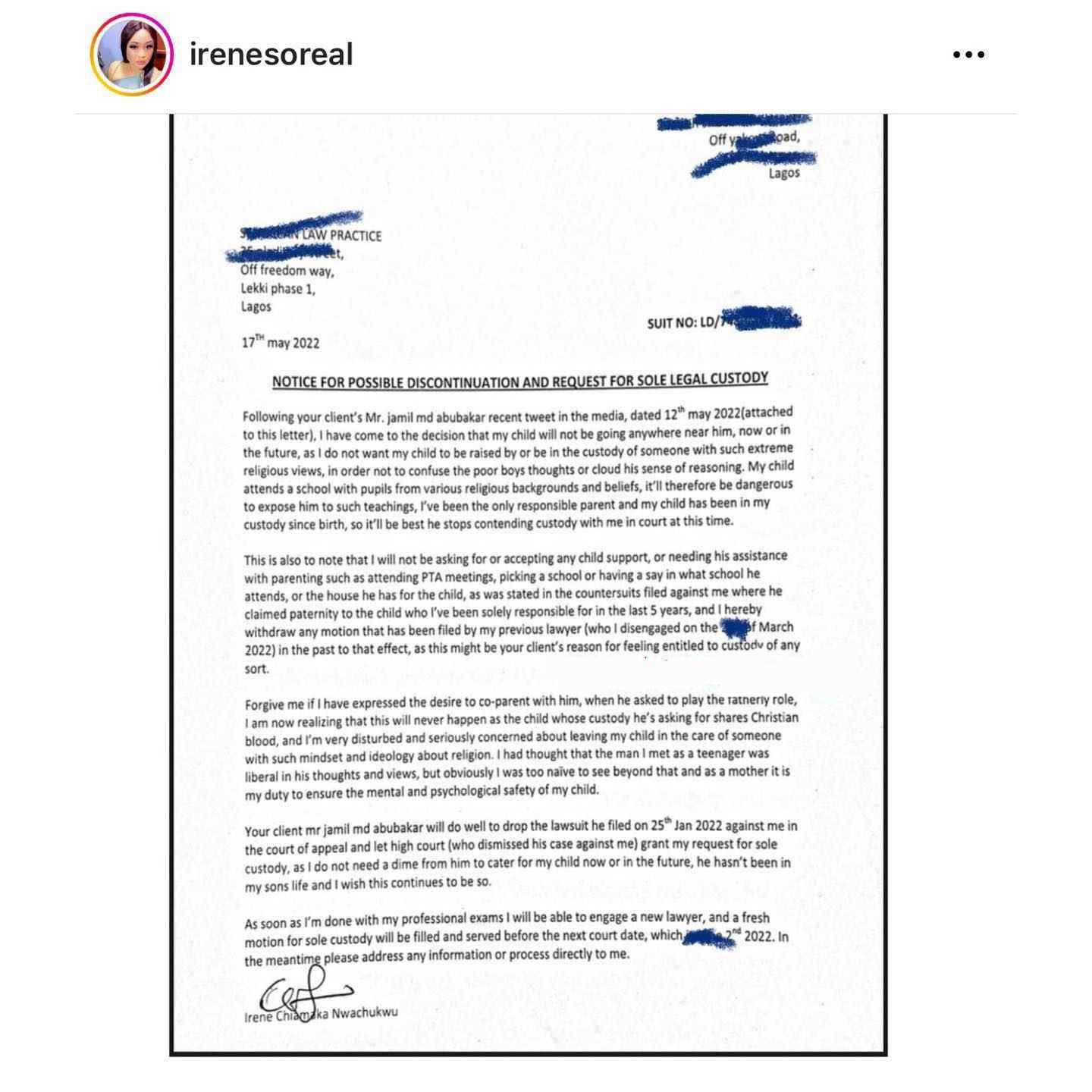 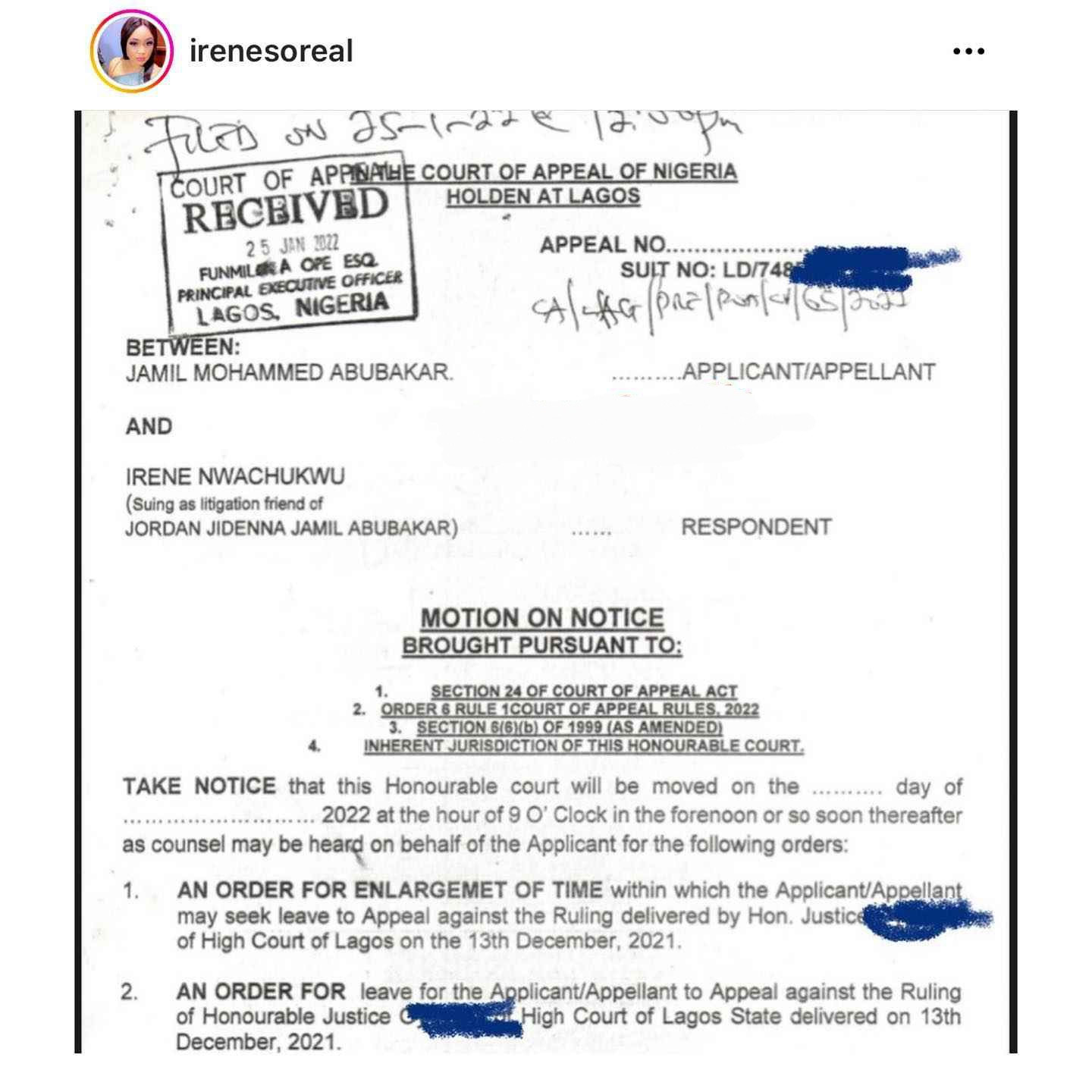 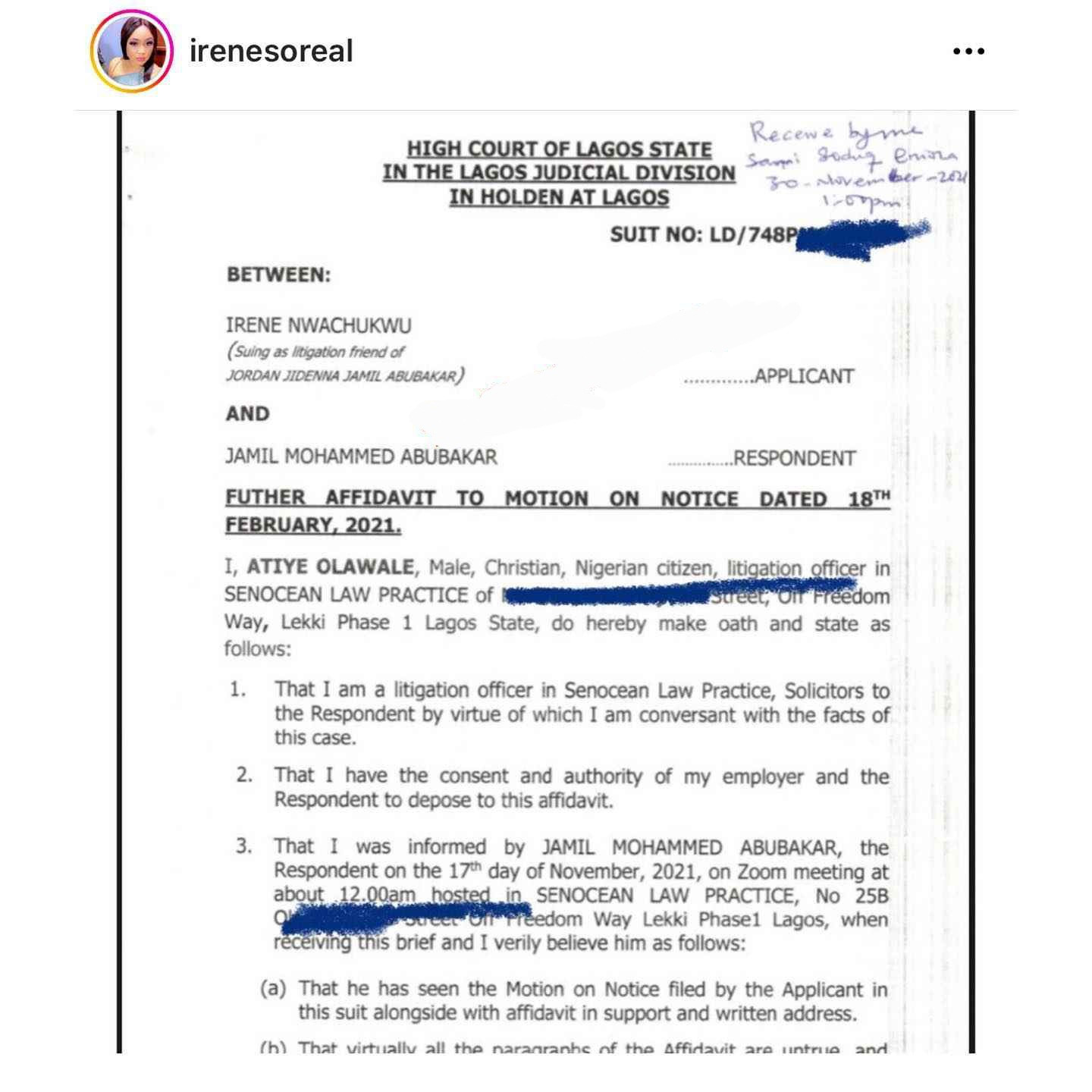 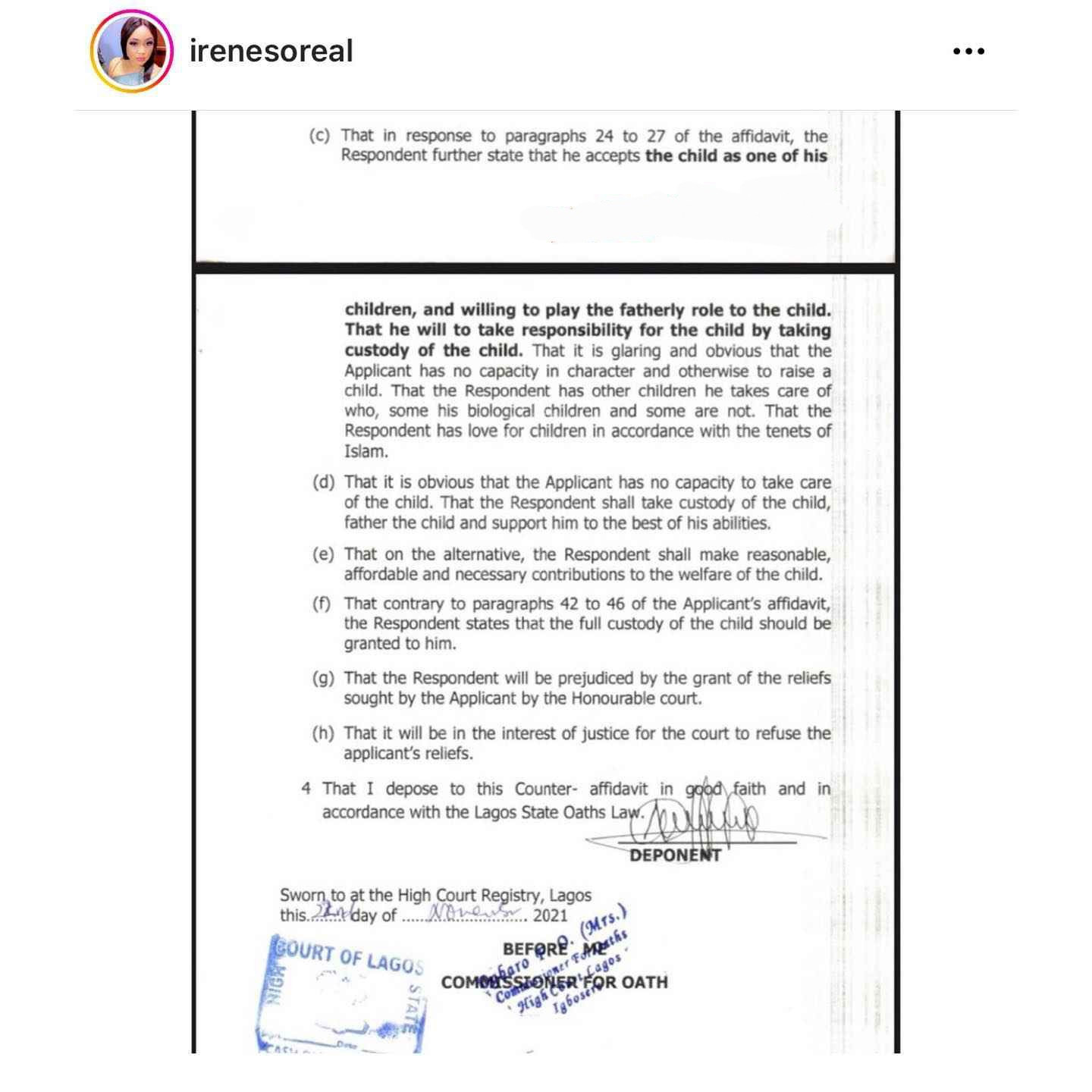