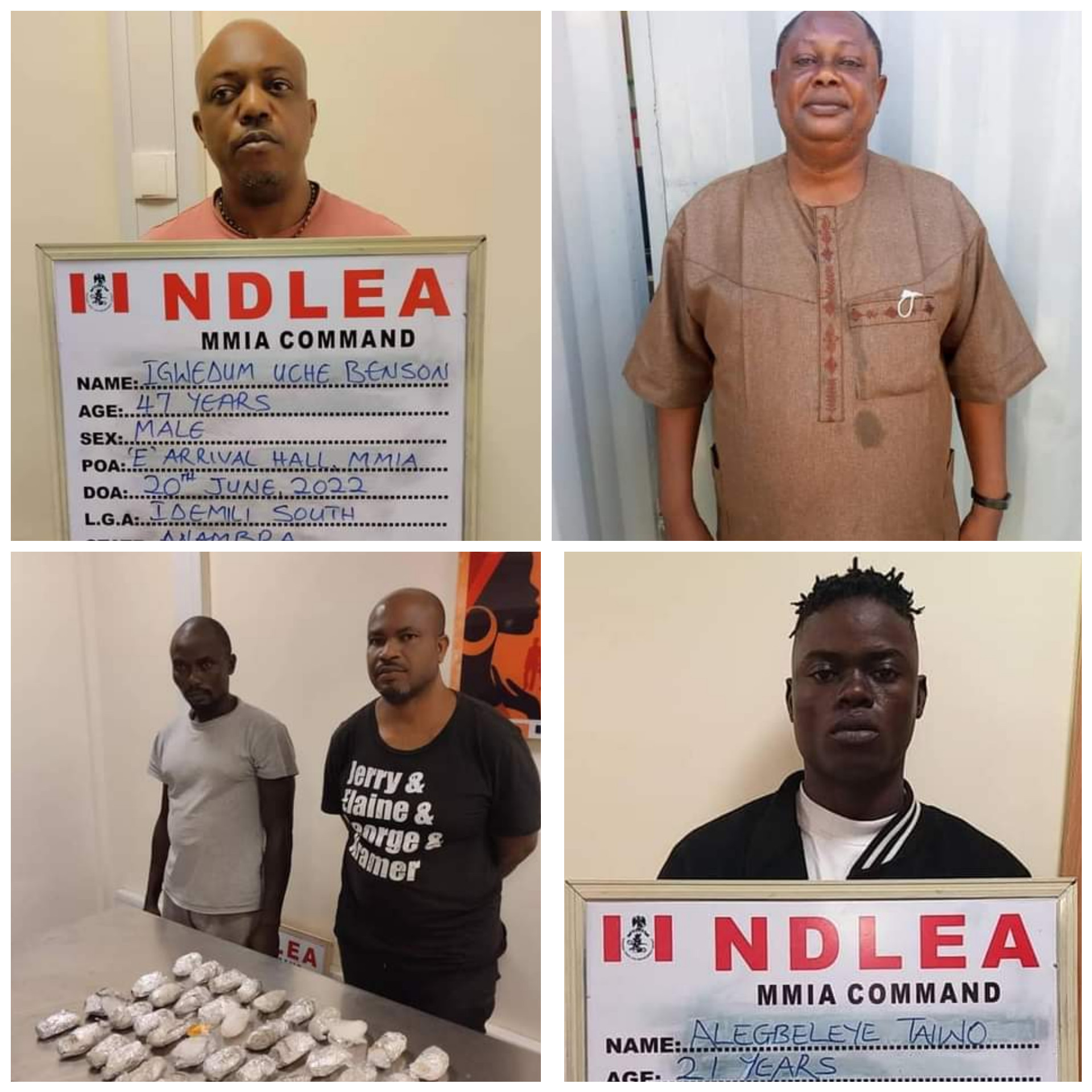 A Brazil returnee, Igwedum Uche Benson has been arrested by operatives of the National Drug Law Enforcement Agency, NDLEA, at the arrival hall of the Murtala Muhammed International Airport, Ikeja Lagos with pellets of cocaine concealed in his private part.

Director, Media & Advocacy of the agency, Femi Babafemi, in a statement on Sunday, June 26, said Igwedum was nabbed at the Lagos airport on Monday 20th June upon his arrival on Ethiopian Airlines from Sao Paulo, Brazil via Addis Ababa.

Preliminary investigations reveal the suspect had swallowed 50 wraps of cocaine before departing Brazil and excreted 48 pellets in Addis Ababa where he handed them over to another person.

He however claimed he was unable to excrete the remaining two wraps at the hotel room in Addis Ababa before boarding his flight but later excreted them in the aircraft restroom during the flight from Ethiopia to Lagos.

In the same vein, after three weeks of painstaking investigation and tracking, operatives of the MMIA command of NDLEA on Saturday night, 25th June arrested an alleged drug kingpin, Onyekachi Chukwuma Macdonald behind attempts to export 40 parcels of Methamphetamine popularly called Mkpuru Mmiri locally to London, United Kingdom through the NAHCO export shed of the Lagos airport.

Onyekachi was arrested at Manacola estate, Alakuko area of Lagos at the weekend, three weeks after his Mkpuru Mmiri consignment weighing 2.05kilograms was intercepted at the airport and his freight agent, Peter Christopher Anikan arrested on 7th June.

During his interview, the suspect said he’s from Ahiazu, Mbaise Local Government Area of Imo state and had lived in Dubai, UAE for 10 years before returning to Nigeria in 2019. He stated that after his return to Nigeria he opened a phone accessories shop in Sango Otta, Ogun state but the business collapsed. He then started sending cigarettes to London and decided to conceal the illicit drug in the consignment after advice by a friend.

Closely related is the seizure of another consignment of 2kg Mkpuru Mmiri at a courier house in Owerri, Imo state.

The cargo seized on Wednesday 22nd June had ankara and lace fabrics in which two cylindrical cellophanes containing the drug heading to Hong Kong were concealed.

Also at the Lagos airport, NDLEA operatives on Friday 24th June intercepted 500,000 tablets of Tramadol 225mg packed in 10 cartons and labelled Tramaking imported from Karachi, Pakistan on Emirates Airline. The consignment weighing 407.60kg was seized during a joint examination with Customs and NAFDAC officials.

Same day, a Dubai, UAE-bound passenger, Alegbeleye Taiwo was arrested at the departure hall of the MMIA with 40 ampoules of pentazocine injection. The 21-year-old suspect claims hes from Osun state.

Meanwhile, two kingpins behind the importation of two recent drug consignments from Canada concealed in vehicle containers through the Tincan seaport in Apapa, Lagos have been arrested by NDLEA operatives.

One of them, Gboyega Ayoola Elegbeji was arrested at his house, 14 Bakare Street, Idi Araba, Lagos on Wednesday 22nd June, for importing a 40ft container TRHU7874497 containing 33 parcels of cannabis indica (Colorado) weighing16.5kg.

The second suspect, Sunday Joe Oyebola, (aka Otunba) was arrested on Thursday 23rd June. Hes linked to the importation of a 40ft container MEDU4389887 containing four vehicles used to conceal 290 parcels weighing 145kg cannabis indica (Colorado) from Montreal, Canada. He had been on the run since March and had in the course of the investigation attempted to bribe officers with N10million to influence the case.

Chairman of NDLEA, Brig. Gen. Mohamed Buba Marwa (Retd) commended the officers and men of the MMIA, Tincan, and Imo state Commands of the Agency for the drug seizures and arrests especially of those who thought they could evade the long arm of the law.

He encouraged them and their compatriots across other formations to intensify their efforts towards achieving set goals. 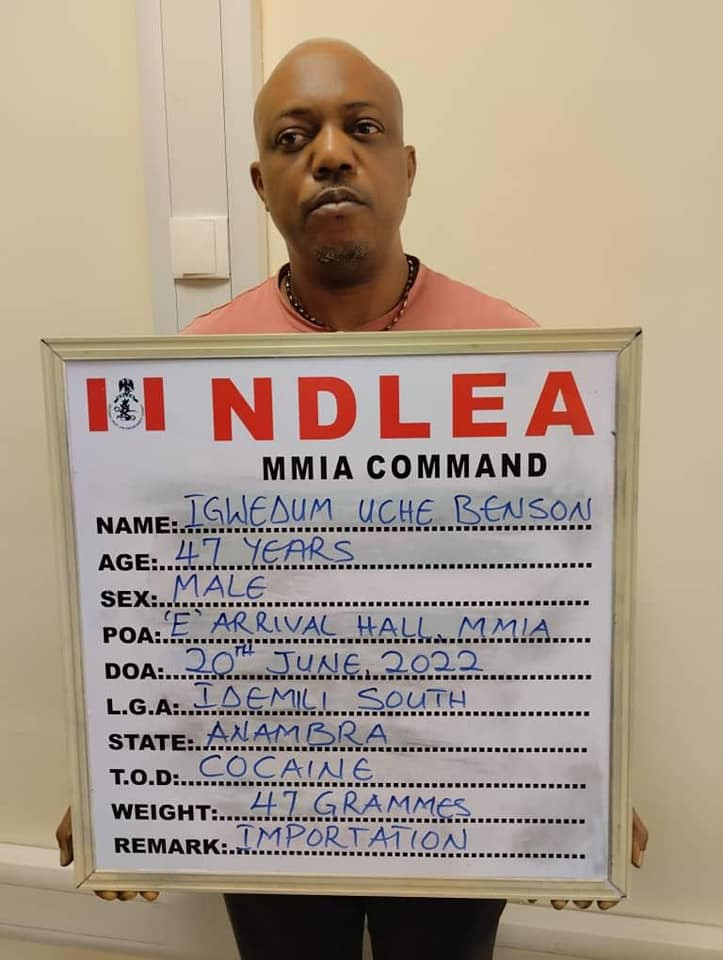 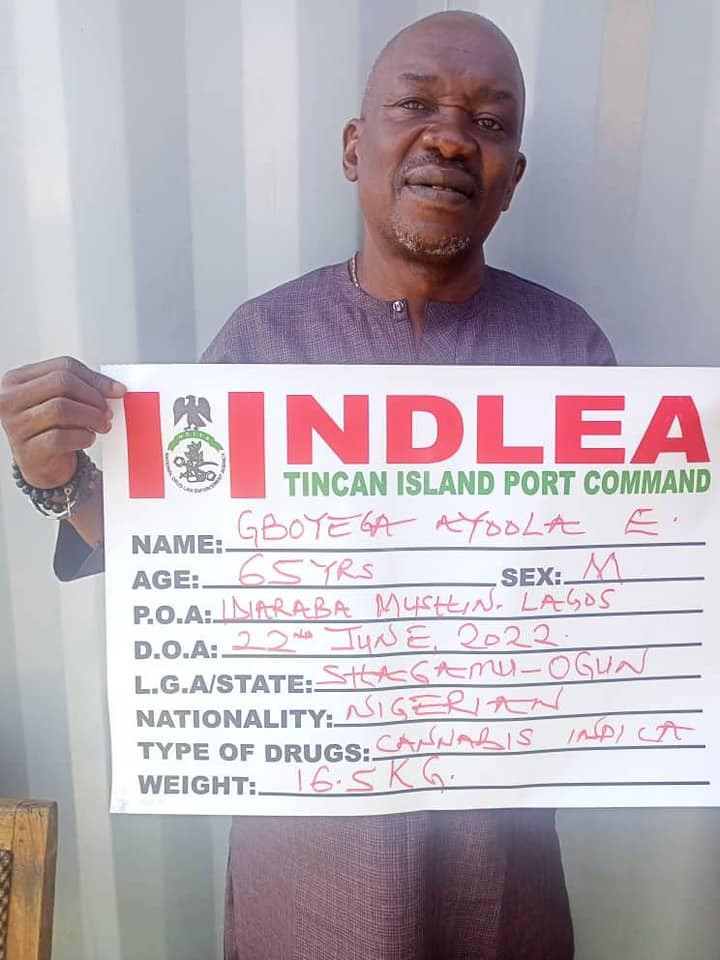 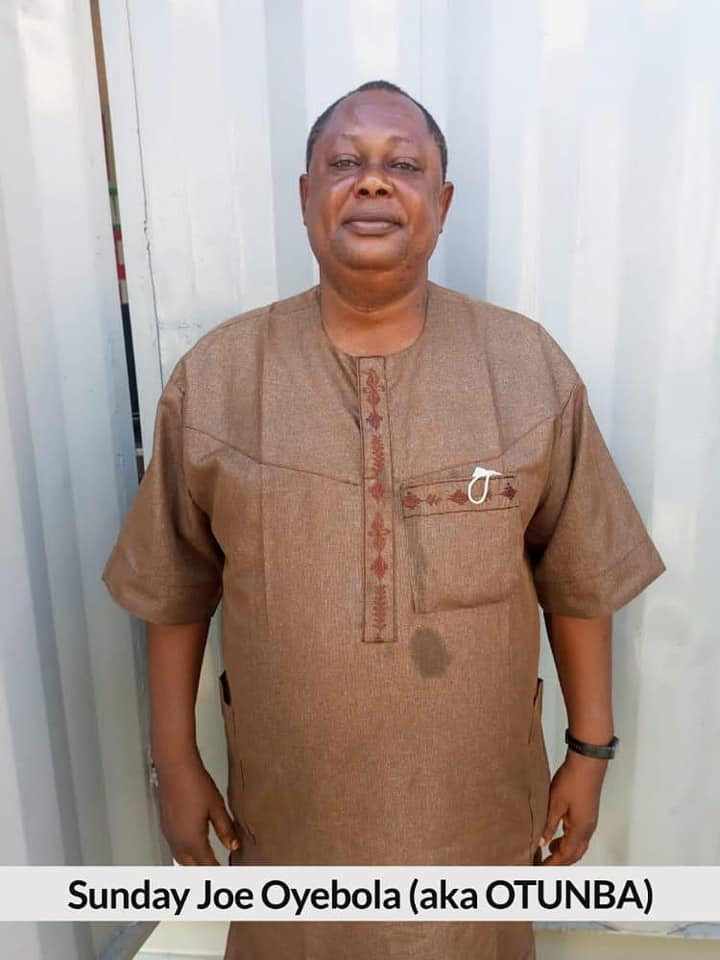 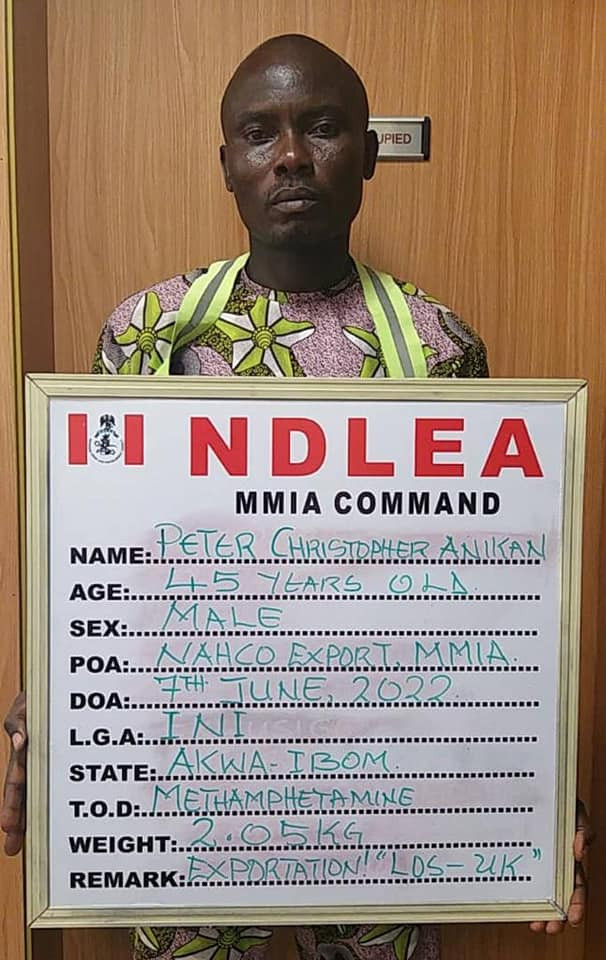 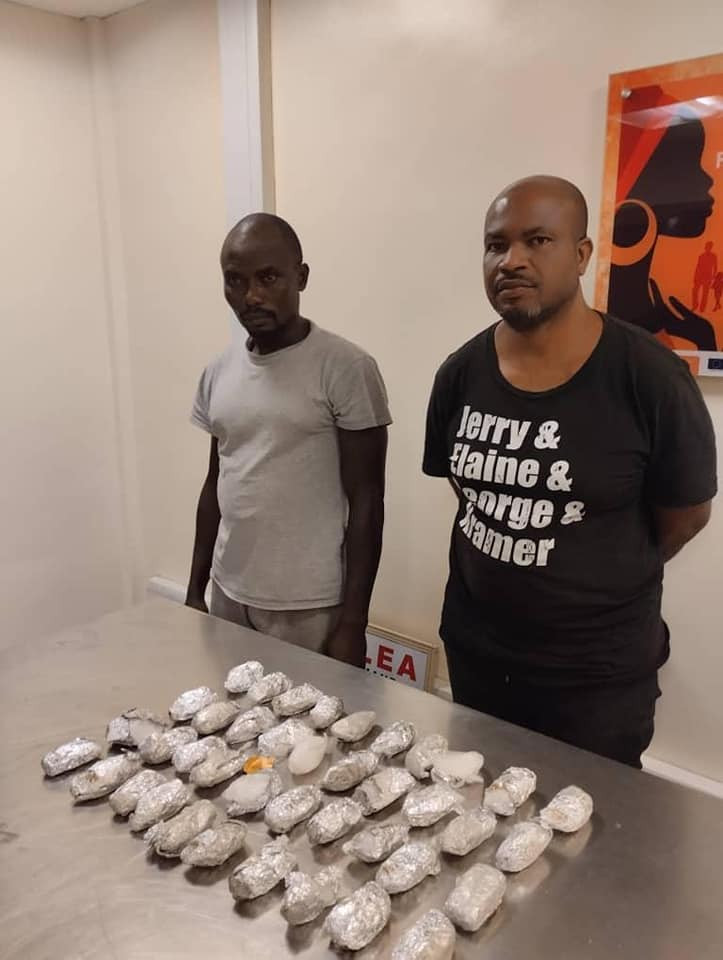 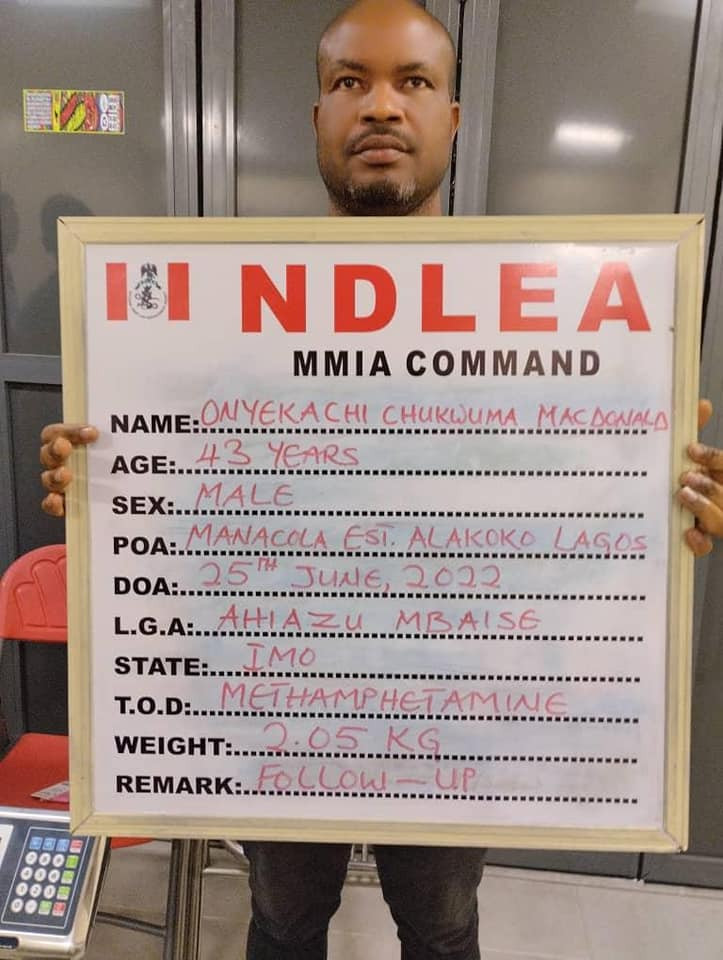 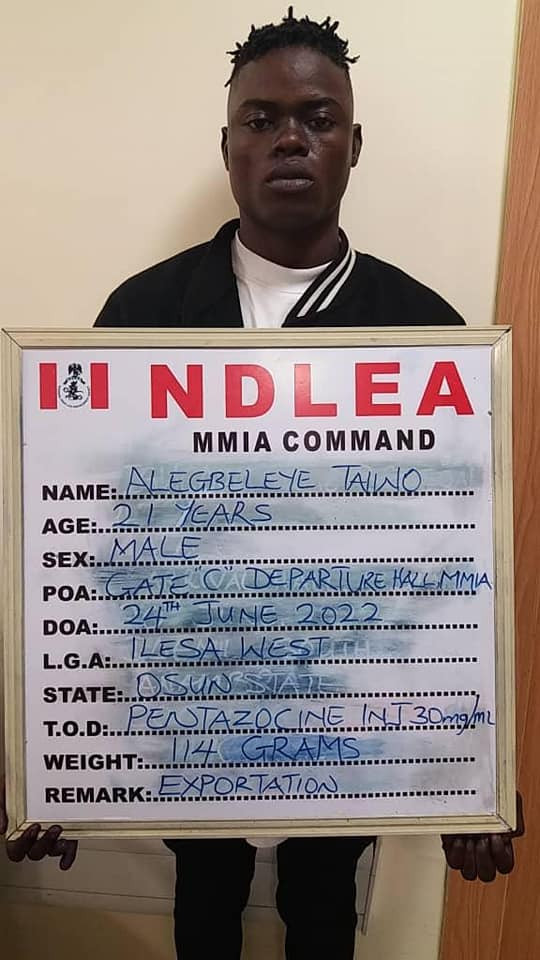 Photo of swimmer, 68, killed by shark in Egypt

Herbalist arrested for allegedly raping his client in Ogun

Sujimoto Is Giving Away A 3-Bedroom Fully Furnished Apartment in Lekki-Lagos on July 1st 2022 for Free. Read This Article to Know How to Win