A suspected Nigerian fraudster has been arrested in India for allegedly duping people on the pretext of providing jobs in international airlines.

The accused identified as Okorie Stephen, 32, was arrested by Delhi Police on Thursday, July 7, 2022.

Police said Stephen had been living in India illegally since May 2014 after the expiry of his visa and passport.

Six mobile phones, a laptop, a wifi router and an expired passport have been recovered from his possession.

On June 4, police received a complaint from Ashish Kumar where he alleged that he had received an email in April this year regarding a job opportunity. The complainant, who was unemployed, had sent his resume to the concerned email id.

The complainant stated that he had received an offer letter for the post of an aircraft technician in Malaysia Airlines and was promised a salary of Rs 1.5 lakh per month.

He had alleged in his complaint that he had transferred Rs. 1,09,383/- to an IDFC First bank account in the name of Loli Florence, allegedly for registration and processing charges.

During the course of the investigation, details regarding bank accounts and e-mails were obtained and, as per the details, broadband was used for the creation of fake email-ids, police said.

After technical surveillance, a suspected address was identified. Subsequently, the police arrested Stephen.

Accordingly, the wife of the accused and their two children were handed over to Police Station Dwarka North and a case of Foreigners Act was registered against them.

During interrogation, accused Okorie Stephen disclosed that they had cheated many people on the pretext of providing various jobs in different airlines.

He also revealed details about his co-accused Steve, who handed over the money to him after withdrawing cash from the ATM, and Loli Florence the bank account holder.

The search for co-accused Steve and Loli Florence is going on. 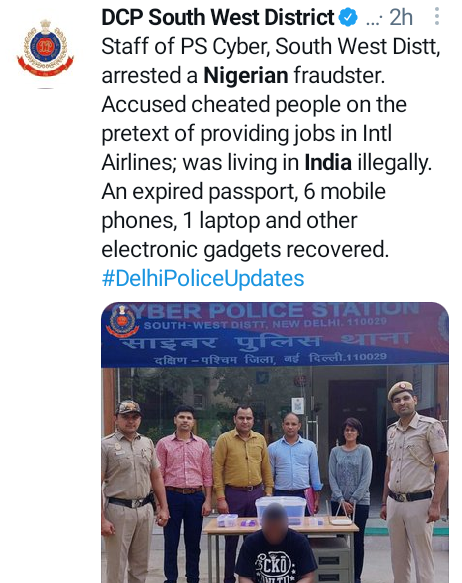